Home * What is a Luthier?

What is a Luthier?

From Wikipedia: “A luthier (/ˈluːtiər/ LOO-ti-ər)[1] is a craftsperson who builds and repairs string instruments that have a neck and a sound box. The word “luthier” is originally French and comes from the French word for lute. The term was originally used for makers of lutes, but it came to be used … for makers of most bowed and plucked stringed instruments such as members of the violin family (including violas, cellos, and double basses) and guitars.” 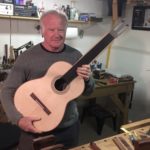 Over the years, classical guitarist Gordon Kreplin has enjoyed working with several luthiers – builders of fine custom guitars. Playing, testing, recording and reviewing hand-built, finely crafted instruments has become an important part of Gordon’s musical journey. Some of those individuals include:

Kind Testimonials written by Students, Families, and Colleagues over the years.

“I wanted to let you know, that not because she is my child, but Mackenley sang her solo in the “Salute To The Tony Awards” beautifully, and I give YOU all the credit!! The compliments she received were unreal, and don’t think for one minute I didn’t sing your praises! As soon as the videos are available, I will be sure to get one to show you! Thank you once again for everything …” HP 11/13